Last month, to celebrate Jeep’s 80th anniversary, we dove into the illustrious history of the Jeep. This month, we want to highlight some of the most famous Jeeps — with owners that include authors and presidents, and cameos in iconic films and TV shows. Here are our top picks.

The good news? You don’t need to be a celebrity or major movie producer to get your hands on a Jeep that people remember. Our team lives the Jeep lifestyle and will work with you to customize your vehicle so that it’s worthy of its time in the spotlight. We lead the way when it comes to high-quality custom Jeep modifications, 4×4 modifications, and upgrades. Schedule a consultation to learn more about popular upgrades from a leading expert. 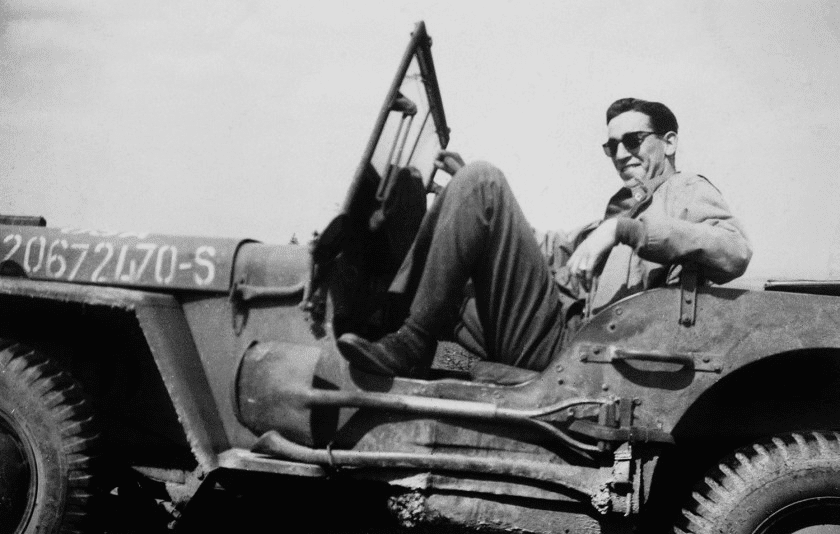 Although J.D. Salinger is best known for his novel The Catcher in the Rye released in 1951, what you may not have known is that he was also a storied and devoted Jeep owner. His love of the brand began during World War II when he was drafted to fight in the Army, and it’s said that he would keep a portable typewriter in the back of his Jeep to work on his writing. After Salinger became famous for his writing — much of which drew on his wartime experience — he headed to New Hampshire, where he was often spotted cruising around in his curtained Jeep. 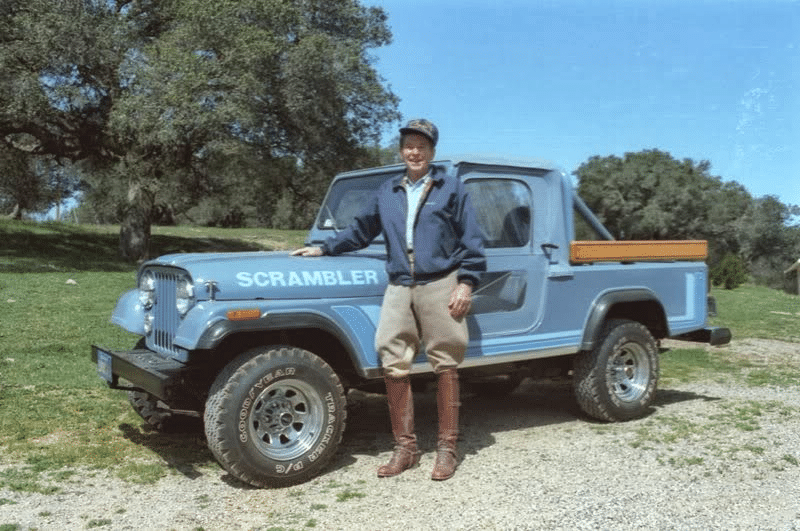 Ronald Reagan was a household name long before he became the 40th president of the US. He was working as an actor when he put his career on pause in 1942 to enter the Army Reserve, where he became a captain and drove Jeeps as a part of his daily duties. Over 30 years later, as the Governor of California, he would roam around his nearly 700-acre ranch in a blue 1983 CJ-8 Scrambler (a gift from wife Nancy) bearing the “GIPPER” license plate. It was the same vehicle that was used to show Mikhail Gorbachev around the ranch, and today the Jeep is on display at a public museum in Santa Barbara, California. 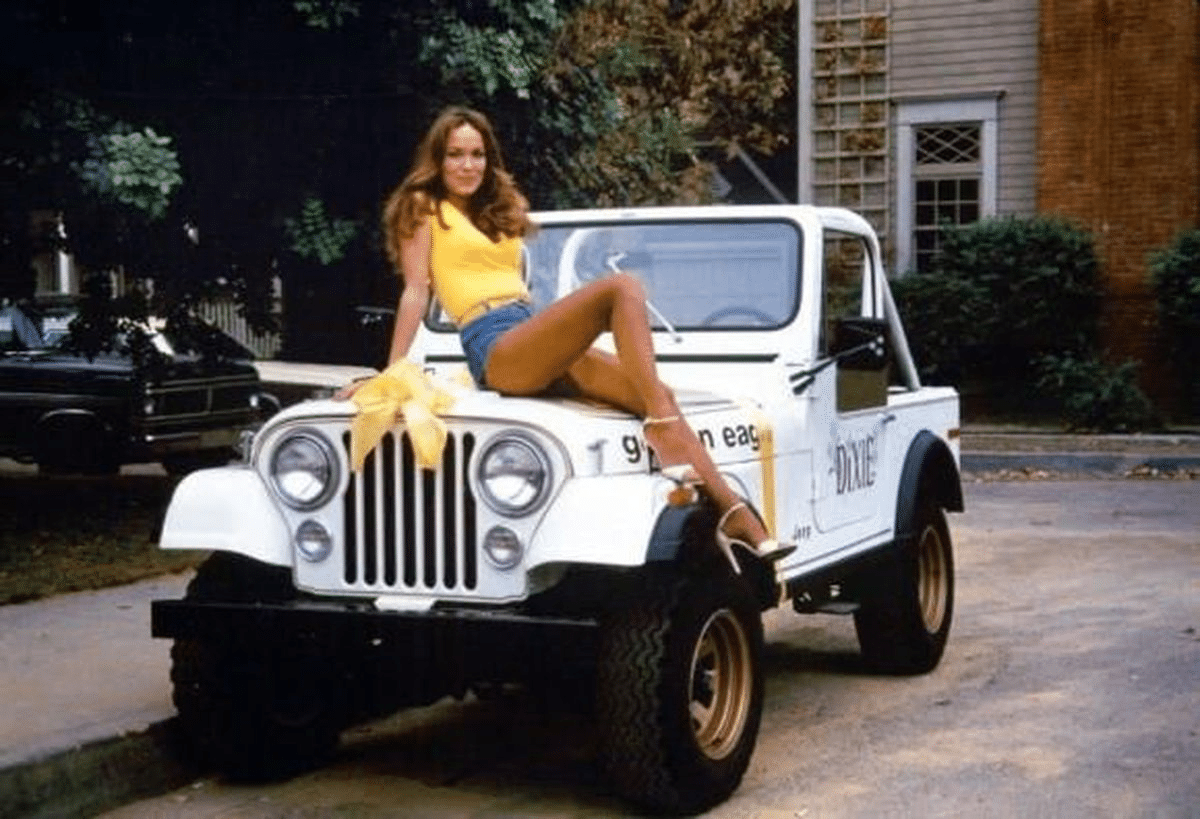 There’s no shortage of iconic cars that appeared in the TV Series The Dukes of Hazzard, but one that sticks out to us the most is Daisy’s 1980 Jeep CJ-7 Golden Eagle nicknamed Dixie. Several of the same models were used throughout the filming of the show, and there was little continuity with the design or even the transmission over the years — but that didn’t stop Dixie (and Daisy) from being burned into the memories of viewers. Fun fact: the Jeeps used in filming were leased by American Motors Corporation with the repayment being a closing-credits mention. 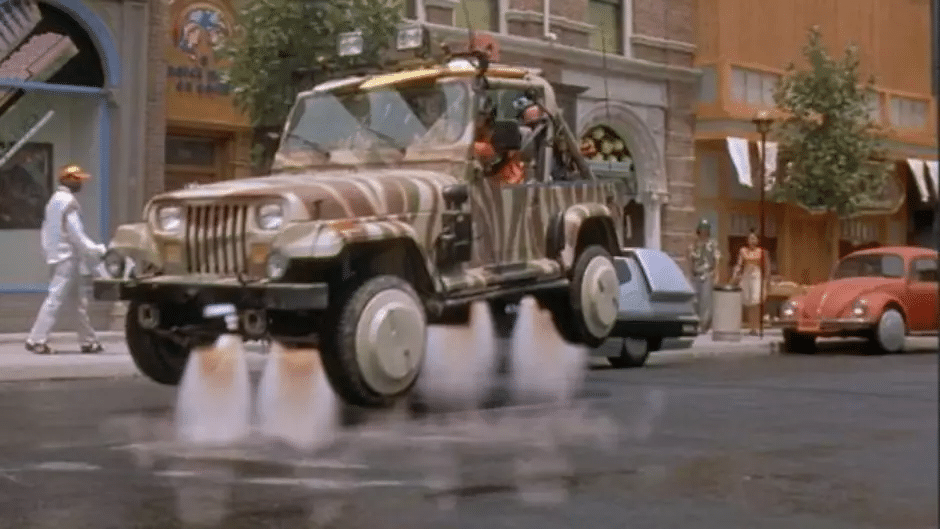 Great Scott! Not one, but two Back to the Future films featured Jeeps. The first time the vehicle appeared was in the flagship film released in 1985 when Marty McFly held on to the back of a CJ-7. Four years later, the sequel predicted a new method of off-roading when a 1988 Wrangler YJ took off flying in what was supposed to be the year 2015. While Jeeps may have come a long way between then and now, we’re not quite ready to take flight in our YJs (unless you count getting air on sweet jumps).

When you look at the 1992 Jeep Wrangler YJ Sahara, you can almost hear the Jurassic Park theme song. It’s almost instantly recognizable as the Jeep that ran to and from prehistoric creatures roaming the sprawling amusement park gone very wrong. We can’t say for certain that Jeeps helped make the movie franchise a blockbuster success, with additional flicks adding to the long-running popularity of the original and the sequels — but it’s safe to say that there isn’t any other vehicle out there that could stand up to a T-Rex the way that Sahara did.

Since The Walking Dead started in 2010, the immensely popular zombie apocalypse show has featured a range of Jeeps including Cherokees and Wranglers alike. From the 1979 Cherokee used in the early seasons to the Wranglers with rugged tires that are used to run away from and destroy zombies, it seems like Jeep makes an appearance in nearly every episode of the series — but you better catch a glimpse before the show ends its run in 2022.