March is Women’s History Month, and to celebrate, we’d like to look back at the role women have played in shaping our work today. Men have long dominated the automotive industry and auto repair world, but that doesn’t mean women haven’t played a significant role. Unfortunately, their stories are rarely told, so it’s hard to understand how important they have been throughout the decades.

Here at Axleboy, we would like to highlight how women shaped the industry’s past and will also impact its future. That’s why we started AxleGirl, an all-women, hands-on training day that allows women to ask questions about their Jeeps and organize rides together. This program gives ladies the opportunity to become comfortable with their Jeeps. If you want to participate in AxleGirl, get in touch with our team! Meanwhile, brush up on your history of women and cars below.

As far as we’re concerned, women have been side-by-side with men since the inception of the automobile – take a look at Bertha Benz, whose last name has become synonymous with “luxury vehicle.” Mrs. Benz was the wife and business partner of automobile pioneer Karl Benz — German engineer, inventor, and credited as the creator of what’s considered “the first practical motorcar”.

When they got married in 1872, he used her dowry as financial support to build his first horseless carriage in 1885. Bertha tested these prototypes, and her help led to the additions of wire insulation and the invention of leather brake pads. She also financed the development of the Motorwagen, but the laws at the time prevented her from holding the patent or credit of the inventor as a married woman.

In 1888, Bertha embarked on the first cross-country automobile journey in a Motorwagen Model III for a trip that lasted about 66 miles. She wanted to prove to her husband (and the world) that she had contributed to a life-changing invention and helped create financial success. Bertha also started the practice of test drives within the automotive industry. In 2008, the Bertha Benz Memorial Route was established to mark and celebrate her journey. 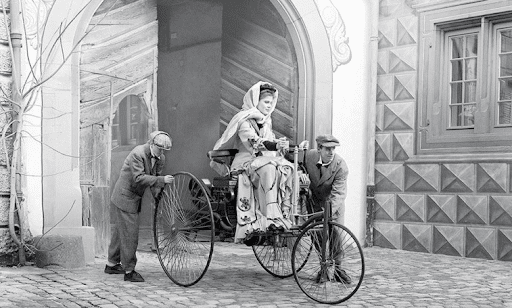 It wasn’t until the 1920s and the mass production of the Model T that women widely became more independent and chose to purchase cars on their own, independently. Later, in the 1930s, Chrysler took hold of this growing trend and created more “modern” advertising targeting women. During WWII, Rosie the Riveter drew in mechanically-minded women who were looking to support the troops and learn valuable car repair skills.

When the war was over and the country no longer needed to use manufacturing facilities for military use, car ownership jumped. Across America, the highway system spread like wildfire, and more families were moving out to the suburbs – where moms needed access to vehicles to travel into town for daily needs like groceries or clothing for the kids. This helped push women into the role of driver and owner instead of just being a passenger while the men were driving.

Over several decades, more women joined the workforce and needed a car for their commute. Changing financial rules and regulations freed them to finance or purchase a vehicle without their husbands’ permission. Today, there are about an equal number of female and male car owners. Women like Denise McCluggage (the only female race car driver to be inducted into the Automotive Hall Of Fame) helped transform the male-dominated racing industry. 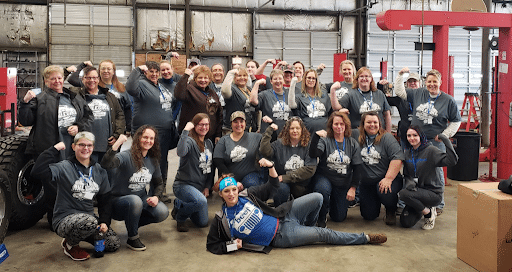 There are also other women whose contributions can be seen and felt in the cars we drive today:

Mary Anderson: This Alabama native created a windshield wiper prototype made of wood and rubber and attached it to a lever near the vehicle’s steering wheel. When you pulled the lever, the wipers moved back and forth to wipe away snow, rain, and sleet, and they could be removed and stored during the summertime. Mary patented her invention, but it was largely ignored by the automotive industry and expired. However, Cadillac was the first manufacturer to adopt the design as standard equipment.

Florence Lawrence: This former movie star created what she named “auto-signaling arms” which used flags on either side of the automobile that could be raised and lowered at the push of a button. This feature evolved into the turn signal, which eventually became mandatory on modern vehicles. Florence then invented a sign for the back of the car that had the word “STOP” painted on it, which warned automobiles when the driver in front of them was slowing down; it evolved into what is now the brake light.